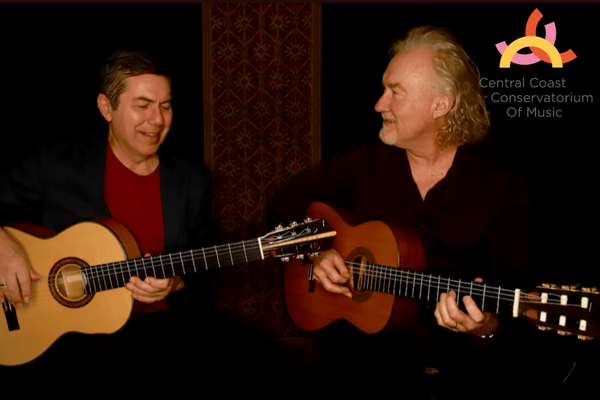 The Central Coast Conservatorium of Music and Gosford Regional Art Gallery are proud to present the electro-acoustic guitar duo of Guy Strazz and Mark Johns.

These two renowned performers are looking forward to presenting their premier concert at Gosford Regional Art Gallery. The concert is a musical journey of great tunes from past and present, including Guy and Mark’s original works, such as the Jazz APRA Awarded “Mandela”, Afro Bouban, and Romantica. The duo will also offer their own rendition of Chick Corea’s Armando’s Rumba and Spain as well as pieces by Tom Jobim, Harold Harlen, Dave Brubeck, Consuel Velázquez, and Mark Johns’ engaging ukulele rendition of Somewhere Over the Rainbow.

Guitarist and composer Guy Strazz has appeared as featured artist at many festivals around the world, such as Jazz Yatra (India), Clusone (Italy), Melbourne International Jazz Festival, and Global Guitar at the Adelaide International Guitar Festival. He has performed with Martin Taylor, Slava Grigoryan, Mike Stern, Vishwa Mohan Bhatt, Vince Jones, Matt McMahon, Joe Chindamo, and Dale Barlow amongst many others.

Amongst the most lyrical players in the land  – John Shand, Sydney Morning Herald

Guitarist and composer Mark Johns is one of the world’s most renowned session guitarists and performers. Previously based in London for many years, he has recorded and toured with artists such as Jeff Beck, Faith Hill, Whitney Houston, Enrique Iglesias, Sting,

Mariane Faithful, Julie Driscoll. Mark’s compositions can be heard on TV series such as Absolutely Fabulous, Bottom, Monarch of the Glen and French and Saunders.

A formidable player What’s On (UK)

Brilliant performance! Congrats to you and Mark and thanks for bringing such great music to town! –  Damian Wright, The Base, Newcastle