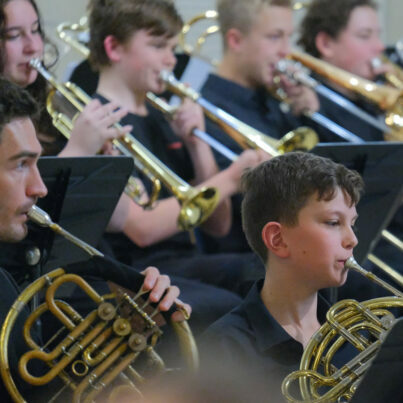 Music fans in Gosford were treated to a musical mash-up with works from Beethoven to Bernstein, Tim Minchin’s Matilda to Pixar’s The Incredibles at the Central Coast Conservatorium’s Term 2 Premier Ensembles Concert.

The Primary Wind Ensemble (aka the Superband) conducted by Kevin Smith, played Our Kingsland Spring by Samuel R Hazo, a West Side Story medley by Leonard Bernstein and arranged by Jay Bocook and an uplifting tribute to ‘Queen of Soul’ Aretha Franklin, arranged by Paul Murtha.

They also sang Tim Minchin’s When I Grow Up from the musical Matilda.

Uncle Gavi Duncan, a local elder from the Darkinjung community, gave a Welcome to Country and performed with his didgeridoo, to mark the start of NAIDOC Week. Gavi, who has been playing the didgeridoo for more than 40 years, was taught to play the ancient instrument by people from Mornington Island in the Gulf of Carpenteria.